In the last several blogs I explained why the antenna is the most important part of designing a UHF RFID system (see figure below). This is because the computer software, reader, and RFID tag are fairly optimized now, and often outside the control of the system designer anyway. But let’s assume we have some say in the deployment of the RFID tags in the scenario of interest. For example, the reader antenna configuration may be more constrained due to space limitations, so proper tag deployment becomes more critical. 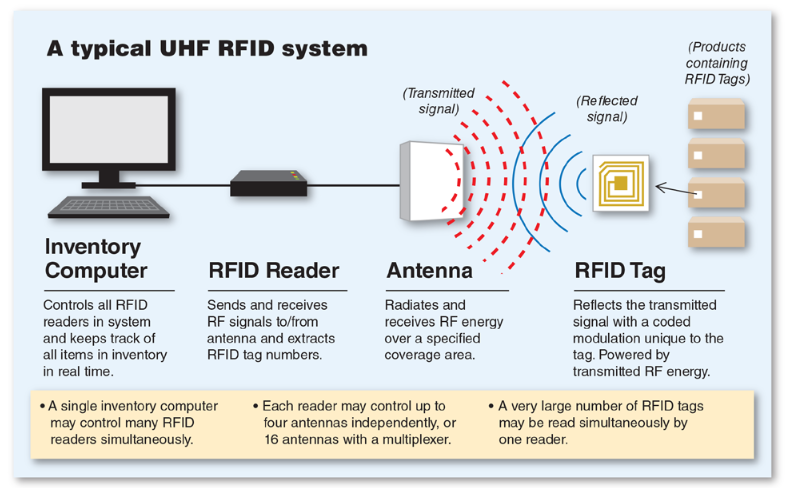 Alignment of the receiving antennas (RFID tags) relative to the polarization of the reader antenna (red arrow) and radiation direction (blue arrow).

In this example the patch antenna is linearly polarized in the vertical direction (red arrow). The RFID tags are dipole antennas which are also linearly polarized. From left to right, the first two tags will have a good received signal, but the last tag on the right will probably not be excited.Similarly, if the antenna is horizontally polarized none of these tags would be excited – because the first two are oriented vertically and the third one is aligned in the radial direction.Circular polarization(CP) is a combination of vertical and horizontal polarizations with a 90° phase difference between the two. CP antennas can read tags that are at least partially oriented in any plane transverse to the direction of radiation (blue arrow). For this reason, CP patch antennas are the most common in UHF RFID applications. There is a cost, however, because CP antennas have a 3 dB reduction in gain for reading linearly polarized tags.

Using more than one antenna certainly helps the situation as shown below. As discussed in previous blogs, this introduces antenna diversity and polarization diversity. RFID readers typically have more than one antenna port for this reason. They cycle through the antennas to maximize the total number of reads in a given coverage area. If one antenna polarization is not aligned with all of the tags, it is likely that one of the other antennas is aligned.

Many of the above issues associated with conventional patch antennas are overcome by the specially designed Wave® antenna as described previously and shown below. The multiple overlapping beams of the Wave® antenna naturally provide spatial and polarization diversity. For this reason, it is the obvious choice for item-level RFID systems. The Wave® antenna virtually eliminates read errors caused by misaligned tags. 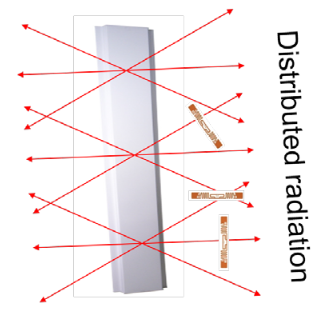 The Wave® antenna has distributed radiation from multiple points along its length. Tags in virtually any orientation are readable.

Besides the deployment of tags relative to the reader antennas, it is equally important to choose the proper tag for the application and mount it on the item in a way that facilities reading. For example, standard printed RFID tags should never be put directly on metal surfaces or in liquids. A tag on a metal surface will be shorted out, and a tag in a liquid will probably not be detected due to attenuation of the RF signal. There are specially designed tags that can be placed on metal or other highly conducting surfaces. They always employ some sort of spacer between the antenna and the metal as shown below. The tag then operates similar to a microstrip patch antenna or folded dipole.

RFID tags that are designed for metal surfaces always have a spacer between the antenna and metal. The tag on the right is a standard printed tag on a foam spacer, rather than a custom designed tag.

In fact, a standard printed tag can be used effectively on a metal surface simply by placing a foam spacer between the tag and metal as sh own on the right in the above figure. The spacer should be at least 1/8” thick. This type of tag can also be used on plastic bottles containing liquids.

Standard RFID tags work well when attached to paper, cardboard, fabric, thin plastic or glass,assuming there is no metal in close proximity to the tag. They can also be detected through these materials, making it possible to completely hide the tag. Common approaches are to put the tag inside cardboard packaging or sandwiched inside a label. They can also be easily RFID Expert’s Corner embedded inside a thin plastic card such as a credit card or ID badge. Recently there has been a trend to put RFID tags in clothing, even embroidering the metallic antennas into the fabric. This works well unless the tag is in direct contact with the skin; some sort of spacer such as an inner liner or another layer of clothing should be present to prevent this.

RFID tags may also be embedded in thick dielectric materials, such as plastic, rubber, wood,concrete or asphalt. However, these materials tend to detune the tag antenna causing reduced performance. It is therefore advisable to use specially designed tags for these materials. Even so, the RF waves may not penetrate the material as well (depending on the dielectric strength and conductivity), so some degradation in performance is to be expected.

Lastly, attention should be given to the environment surrounding the tag. Metal will block the RF signal, and other materials can be highly attenuating. The more material there is between the tag and reader antenna, the more the attenuation. Also, tags that are very close to other tags can degrade their performance. For example, a number of thin clothing items that are stacked with all the tags in the same place and with the same alignment will make it very challenging to read all of the tags. In this case it would be helpful to have the tags randomly placed on the items.

To summarize, the following is a list of dos and don’ts for RFID tag deployment.